So, this is what it's all about! I type a few thoughts of wisdom, some news or add the odd picture and hope that the great wide blogosphere clicks a path to my blog. Well here goes.

It being the evening of 21 December, I had just poured my first glass of wine  (not counting lunch time) to celebrate the Winter Solstice when I was propelled into a state of consternation. I should explain that in my heirarchy of priorities the winter solstice is way more important than Christmas, indeed was celebrated long before said religious festival. I love it as it marks the point at which the days start lengthening and spring beckons.  My mental disarray started when I spotted an article in The Guardian informing me that, this year, the much desired event occurs a day later, on 22 December. http://www.guardian.co.uk/science/2011/dec/21/when-is-winter-solstice

Oh well, I'll just have to celebrate it again tomorrow.

In France, 21 December marks the beginning of winter and down here in the south that usually means the end of a lovely warm and sunny autumn. This picture, taken a couple of years ago, will give you an idea of what I mean. 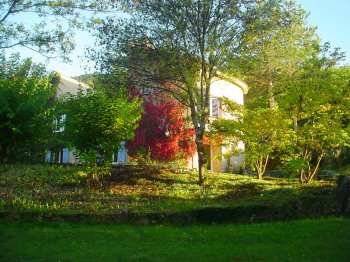 Not this year, though. Autumn 2011 has been characterised by grey skies and the full gamut of liquid precipitation from lashing rain to English drizzle. The initial heavy rain, caused by a rare épisode cévenol, was actually very welcome after the usual summer drought; the forest was well dampened and I no longer had to spend an hour every enening watering. Moreover, the groundwater supplies, on which we depend, were amply replenished. After a couple of weeks and some 300mm of rain however, the pleasure began to pall somewhat. What followed was much worse. Weeks of glowering skies, drizzle, mist and a most unwonted lack of sunshine, enough to set off SAD in even the most phlegmatic northerner.

Joan attributes all this to the forces of sod; all because we had had solar panels installed on La Primelle roof at the end of the summer.

Well, with winter starting today (or is it tomorrow?) we hope for some clearer skies and a resumption of electricity generation.